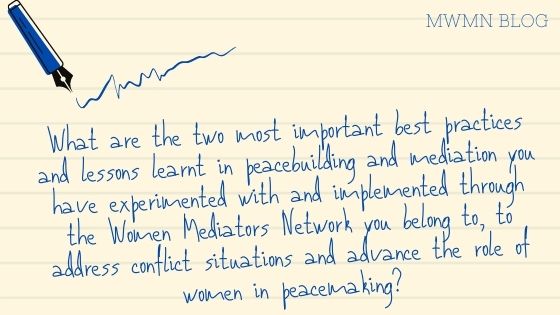 Involving women affected by conflicts in mediation is important. My experience has shown that women are more prone to suffer from the impact of conflicts than men in the same context. Women are aware of the root causes of the conflicts not only because they are part of the community but also because have an incredible ability to listen to conversations while being unnoticed. They know the early warning signs that contribute to the development of conflicts and how this happens. They see that “the number of goats has suddenly reduced, that chickens are disappearing, that men are gathering in the night”, and can “listen in” to conversations as they serve food or beer to the men involved. In mediation processes, selected women must represent all conflicting groups and must be known and trusted by the conflict parties.  With impartiality, such women mediate conflicts because often they know more than the average members of the community. They use their knowledge of the impact of conflicts on women, children and the elderly so that during mediation they ask questions such as: What would you want for your daughter? What would you want for your mother? What are your hopes for your young son? Such questions appeal to the heart and soften the hard-line stances of the conflicting parties.

It is important to make women mediators part of the government structures for peace and conflict resolution mechanisms so that women’s role is institutionalised. Civil society needs to influence criteria for formation of local peace committees to ensure adequate female representation. While government policies may provide for the formation of such committees, often the criteria recommended are put forth by the holders of certain functions of government, who are often men. This usually leaves one or two positions for women on the peace committees. While such policies may be adopted before women peace activists are aware of them, it is then important to move on and change such criteria, thus making the case for gender equality.

The Coalition for Action on 1325 (CoACT) has implemented a project supported by Women Mediators across the Commonwealth (WMC) in a district where only the District Peace Committee had been formed. The project facilitated the training of women mediators and the formation of local peace committees. The women selected for the training were known as peacebuilders within their community. Strategic government officials were invited to speak at the training, which made it easier for the new women mediators to be selected during the formation of local peace committees – making them part of formal peace structures of government – and for their work to be recognised. It is also vital to ensure that women mediators form a network to enable the continuous sharing of information, lessons and supporting each other across different communities. The local women mediators networks become part of the national women mediators network, which increases their profile and gives them a platform for continuous learning.

Founder and Executive Director, Coalition for Action on 1325, Uganda – Member of the Women Mediators across the Commonwealth

Building peace and deploying mediation efforts in conflict contexts require the prerequisite of a genuine and tireless will to be part of the solution, as in most cases what is at stake is saving lives. To such an extent, women’s perspectives and involvement, in complementarity with their men fellows, at all levels and in all stages of conflicts prevention, resolution and building as well as in reconciliation and post-conflict reconstruction, are therefore essential. In concrete terms, one of the most relevant and unanimously admitted lessons learnt concerning the added value brought by women’s association to peacebuilding and mediation processes is their inner predisposition to maintain in focus the ultimate goals of saving lives and responding to the vital needs and rights of the communities involved.

In doing so, be it through their engagement at the grassroots level, in civil society, in diplomacy or in decision-making positions, women will always endeavour with tenacity to bring creative and “out of the box” perspectives and alternative solutions to overcome stalemates. Thus, reinforcing their participation and mainstreaming gender perspectives in conflict prevention and resolution, as well as in peacekeeping operations, is essential. Moreover, these actions are directly linked to the need to ensure that peace agreements and their implementation mechanisms include provisions to strengthen the role of women in all phases of conflict resolution. The Algiers Agreement for Peace and the reconciliation process in Mali are good examples in this regard.

This leads me to the other lesson learnt and best practice that is inextricably linked to the previous one: the mobilisation of men for women’s full participation and empowerment. Unless men are genuinely committed to and convinced of the need for women’s empowerment in general, including women’s access to decision-making positions and men’s acceptance of working with them jointly in mediation or peace processes, the ultimate objective of advancing women’s role in peacebuilding and working with them on par will be sought in vain.

Mediation, peacebuilding and conflict resolution approaches have been in existence for eons. King Solomon in biblical times used what has come to be accepted as “wisdom” to arbitrate a dispute in which two women claimed to be the mother of one child. Differences in socio-cultural perspectives and historically negative relationship dynamics form part of the root causes of all conflicts. Nevertheless, current, widely accepted models of conflict resolution systems and processes are broadly derived from the worldview of theorists and practitioners in societies that view and understand conflicts from a particularly individualist, Eurocentric perspective. It is no secret that in collectivist cultures, such as in the biggest part of the Global South, people have their own conflict resolution models that differ markedly from those of the Global North or the Western world.

The first lesson to be drawn from this is the following one: in a world that is becoming ever-more globalised politically, socially and economically and that recognises multiple cultures and ways of being, it is necessary to ensure that conflict resolution and peacebuilding systems and processes are inclusive and responsive. If this is done, these systems and processes will acquire increased integrity and be more likely to aid practitioners to attain alternative dispute resolution results that are equitable, balanced and sustainable. Using cookie-cutter approaches to peacebuilding and in mediation practices, given the diversity of our humanity, places severe limitations on the attainment of durable and sustainable results. It is important to design processes that fit the context, the people and the problems they present.

The second lesson is about recognising and acknowledging the impact of power on the world order. Its concomitant institutions, systems and the processes designed to oversee security, conflict resolution and peacebuilding are de facto power brokerages. Nations and institutions charged with keeping order in the world have formulated rules that fit their visions and perspectives to advance selfish interests of power and control. Conflicts around the world appear to be fuelled by these visions. They have imposed rules of engagement that enshrine territorial integrity and grant veto power to a select few. This power is used to support proxy wars that usually have historical roots in negative relationships, religious sectarianism or in ethnic divisions in far-flung places of the Global South. Although praying for peace has been de rigueur for ages, that and the other half-hearted efforts to establish peace have failed to transform and resolve conflicts around the world.  Instead, conflicts have become entrenched and endemic everywhere in our world.  The failure to incorporate cultural perspectives, historical contexts and international power dynamics in dispute resolution practices leaves practitioners with root cause analyses that lack integrity.  When the foundation for resolution is weak, the resolution cannot stand.

Throughout the years, I have met and talked to various non-state armed groups and state leaders from regions torn by war across the world for a mission of mediating conflict and bringing the warring parties to the negotiating table. I have witnessed resentment, resistance and power at play, but I have also seen hope, dignity and the dreams of the laypeople for a better, violence-free life. Official peace processes and final conflict settlement are often said to include women. In many cases, while women are disproportionately affected by conflicts, they play a central role in rebuilding communities and crossing boundaries to demand peace and save lives on the ground. At the top level, negotiation processes are usually dominated by a masculine paradigm, which concerns only the top official leaders who are mainly men. Such exclusion might deprive women of the precious opportunity to use their experience and agency to create peace. However, acknowledging that women are mostly portrayed as victims, we must be aware of avoiding a common pitfall by including them in the mediation process merely as a token of pity. Instead, women peacebuilders and mediators have the right to reclaim recognition and representation.

While the terms “peacebuilder” and “mediator” may have interchangeable meanings, in practice, mediation demands more specialised skills and formal recognition. It requires years of gaining trust, negotiation capacity, strategic mindset and knowledge of the international mechanisms and know-how on standing with impartiality between the warring parties yet remaining both firm and being an empathic listener. On 23 December 2020, the Southeast Asian Network of Women Peace Negotiators and Mediators (SEANWPNM) was launched during an introductory meeting between members of its steering committee and Indonesian Foreign Minister Retno Marsudi. Initiated by Indonesia under the leadership and guidance of its foreign minister, SEANWPNM aims to enable women from the region to advance the inclusion and meaningful participation of women in all phases of peace processes as mediators and negotiators.

Even though it has only been six months since its establishment, SEANWPNM members, both individually and as a group, are working hard to fulfil its objectives. Since the crisis in Myanmar occurred in February 2021, several members of SEANWPNM have been actively involved in trying to find a solution, especially in the lead-up to the ASEAN Leaders meeting that took place on 24 April. They have periodically provided briefings and policy recommendations to policy makers and high-level government officials, both in ASEAN and internationally. This collaboration between SEANWPNM and states in the region has proven to be efficient as it has led to concrete, tangible recommendations to be implemented.