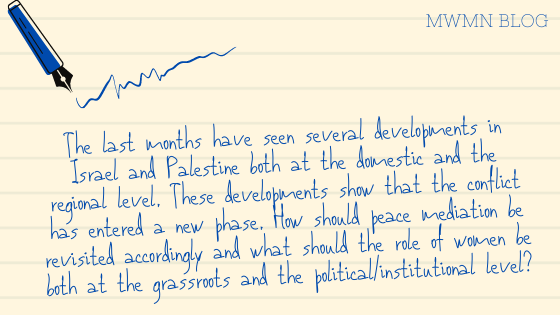 The State of Palestine’s Basic Law and National Policy Agenda 2017–2022 clearly states that it is the vision of Palestine to promote gender equality. It further outlines that women’s participation in official institutions needs to be strengthened, and underlines the importance of including women’s experiences and perspectives in official discussions on the occupation and its consequences. However, in practice, Palestinian women view those statements as lip service to a civilised rhetoric that is neither existing nor serious.

Women’s participation in politics in the Middle East is very modest as the glass ceiling is relatively low. For example, in the Palestinian Ministerial Council, women represent 14 per cent, in the diplomatic corps 11 per cent, while only one Palestinian governor out of 16 is a woman. The challenge lies in the patriarchal culture and in the fragile political system that is held together by this culture. If there is a political will to include and empower women as equals to men, women will play a more meaningful role at the forefront. Many women in Palestine are highly educated, professional and competent, yet they tend to be excluded from important processes related to both governance and conflict resolution. The problem is therefore not primarily related to lack of capacity amongst women, as illustrated by their high education rates, but rather to structural and multi-layered challenges that hinder their meaningful participation.

In May 2021, not only did Israel commit a war crime on Gaza, killing 250 Palestinians, but Israeli occupation forces arrested 1,550 Palestinians. Continued attacks and orders of forced eviction against Palestinian residents of Sheikh Jarrah and Silwan neighbourhood, ongoing settler colonial expansion and new confiscation of lands – all this leaves no room for the aspired two-state solution. As long as Israel is enjoying impunity, Israeli war crimes are undertaken in the form of extrajudicial executions, forced evictions, annexations, apartheid and persecution. While the American government and other Israeli allies attempt to shift the conversation on Palestine to rhetoric about ceasefires and a return to calm, it is important not to get bogged down in distractions and forget the broader context. The international community must understand that de-escalating violence and achieving change and peace is impossible without adopting a different approach that is women-led.

The conflict has entered a new phase with a new Israeli government and a more involved American administration. Peace mediation must be revisited accordingly and serious attention should be given to the role of women, both at the grassroots and the political/institutional level. Studies show that peace processes experience more dedication, resilience and steadfastness when women are involved. Despite this, women’s political participation is still the exception. 2021 marks the 21st anniversary of the UN Resolution 1325 and more light is yet to be shed on women playing major roles around the world, especially in the Middle East. Some countries are adopting gender mainstreaming foreign policies to ensure bringing peace, universal values and human rights to the world; time is ripe for women. As a founding member of the Mediterranean Women Mediators Network (MWMN) – established in 2017 – and reflecting on the success of women in politics such as Angela Merkel in Germany, Jacinda Arden in New Zealand and Sanna Marin in Finland, I can be hopeful that women’s participation in the Middle East will become more robust and meaningfully contribute to the reconciliation efforts that have not succeeded in ending the latest 15-year divide. Women’s participation is becoming necessary towards realising the desired unity. And above all, following 30 years of procrastinated negotiations, it is time to consider women’s involvement in any future political rounds to end the conflict.

It is unwise to repeat old approaches and strategies. The Middle East needs a women-led macro-framework with from-top-to-bottom approach to end the occupation, recognise the Palestinian state and identify the borders of the recognised state of Israel. The step-by-step approach cannot resolve the conflict. It will only lead to procrastination, to coercive diplomacy and to the old Machiavellian-type negotiations, which will only buy more time for Israel to confiscate and annex more lands at the expense of Palestinian rights and of conflict resolution.

The Israeli-Palestinian conflict is complex. As a member of the Israeli negotiation teams in the 1990s and 2000s, I was once hopeful that peace was around the corner. These hopes were shattered. Unfortunately, today peace seems away further than ever. Two main approaches, from both sides, are emerging that represent a grave threat to any prospects for peace.

The second idea focuses on the other side conceding its national aspirations. There are suggestions from the Israeli side that Palestinians forego their demands for self-determination expressed in sovereignty over land, and settle for a good economy and an improved standard of living under permanent Israeli control. Some on the Palestinian side urge Israel to give up its identity as a Jewish state and homeland for the Jewish people and become a state of all its citizens, without any national identity.

The second idea is perhaps less radical, but is as detrimental as the first to any chance of peace. Without acknowledging that both sides have a right to exist as well as a right to realise their national identity, there is no hope for a lasting peaceful resolution to the conflict.

For any progress toward peace, there are two imperatives: empathy towards the other side reflected in a genuine attempt to understand its narratives and concerns; and pragmatic solutions, with both sides making significant concessions. Women tend to be particularly adept in displaying empathy and in being pragmatic. Having more women on both sides in the decision making concerning the conflict can inject the process with these vital ingredients, and then perhaps hope for peace can return.