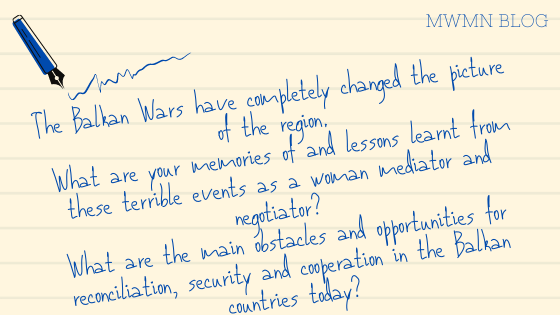 Only a few weeks ago, I was reminded what it meant to have your rights as an equal citizen denied. That horrible feeling of being considered a second-tier citizen. It sent me back to the many memories of my life when I was denied equal rights, when I was under threat or had to choose a particular course for my life because of my ethnic identity. It made me feel sad that once again I had to come to face with this injustice. Despite this fact, today I live in peace, in my own country and I am free to embrace my ethnic identity alongside my many other identities as a woman, an activist and even as an aunt. I was made to realise once again that we have not come full circle in closing the chapter of wars in the Western Balkans. We do indeed live in peace, yet as a region we still need to go down the path of making our peace meaningful on the basis of tolerance, respect and mutual understanding – as the former Secretary-General of the United Nations Ban Ki-moon once said.

Reconciliation has not been the norm in this region. The refusal to acknowledge and recognise the crimes that were committed, and a culture of impunity have characterised the region throughout these decades. The new generations, who know nothing of the past or of the war, nonetheless have grown up and live with a weight on their shoulders that is not theirs to carry. While there have been many who have tried to bring communities closer together, the challenge remains that politics is not ready to take that step and guide societies towards meaningful reconciliation, security and cooperation. From a very young age, I have learnt the hard way the important lesson that strength rests upon those who have the courage to extend the hand of acceptance, of reconciliation, of forgiveness and this can only happen if we make the quest for justice, for truth, for the right to know, an important part of our daily lives and mission. Only then we can truly say we live in peace with one another.

Wars on the territory of former Yugoslavia were driven by deeply rooted and historically based ethnic conflicts between Serbs, Croats, Bosnians and Albanians, which were politically fuelled by the promotion of nationalism. Although these wars ended with peace talks and the engagement of external actors, the ethnical conflicts lying at their origin were never really addressed let alone resolved. Especially in Bosnia and Herzegovina, ethno-nationalist and religious discourse remains part of the political culture, the main asset of political mobilisation and profitability. In such a context, ethnic divisions are entrenched in almost every aspect of societal relations, the educational system being one of the most critical venues reflecting this state of affairs.

In some parts of the country with ethnically mixed population, segregation is present in schools and consistently practiced within the so-called “two schools under one roof”, where children from different ethnic groups visit the same school but are taught separate curricula in separate classrooms. In such communities, any kind of formal and institutional interaction among the youngest generations from different ethnic groups is a priori prevented. As a consequence, these children do not have any concrete opportunity, will or interest to engage in dialogue or interact among each other in everyday life. Instead, they are fed an image of the Other based on often xenophobic prejudices and distorted stereotypes. It is therefore essential to teach these children how to interact and respect each other regardless of the differences that derive from their ethnical and religious backgrounds. Only if they learn to be tolerant when they are young, will they continue to be tolerant as adults and resolve conflicts in a peaceful way.

Having this in mind, the European Centre for Dispute Resolution (ECDR) proposed to the Slovenian Ministry of Foreign Affairs the implementation of the School and Peer Mediation Project in Bosnia and Herzegovina as a form of external assistance coming from Slovenia. The Ministry has accepted the initiative and after three years of project implementation, done in collaboration between the ECDR and ITF Enhancing Human Security, the results are excellent. Teachers and students from all ethnic groups are learning the methods of mediation, the psychology of conflict and the use of mediation in everyday situations, starting from their daily work and communication. As a result, fewer behavioural measures have been imposed and the school climate has improved.

The disintegration of the Socialist Federal Republic of Yugoslavia (SFRY) is the name given to a set of historical events that began during the 1980s and that led to the cessation of its legal existence as a state. The disintegration of the SFRY created seven new states in Southeast Europe. The time of their creation was marked by war conflicts and violence, huge material damage, loss of life and the most massive wave of refugees in Europe since World War II.

As an advisor to the President of the Republic of Croatia, I participated in many negotiation rounds offering Croatia’s peaceful solution to the dispute. We proposed many actions and initiatives to establish peace and return the displaced population to their homes. There were three UN missions in Croatia during the war. The last UNTAES mission was declared a complete success and met all the expectations. In this context, Croatia peacefully returned its eastern occupied territories.

The participation of Croatia and other post-Yugoslav states in regional political stabilisation processes is complicated by historical burdens, including the recent war. They are particularly pronounced in the relations between Croatia and Serbia, whereas they are much more successful in relations with Montenegro. The legacy of that period also entails border disputes, complex property relations between the newly formed states, the problems of missing persons and return of refugees. Croatia seeks to resolve these issues by following international law and on an agreed interstate basis. Such an approach has, among other things, enabled Croatia’s accession to the European Union.

Fighting for your dream is never easy but it is possible. Our dream of becoming a free and independent nation made me engage in a constant struggle, which was not always an easy decision to make given the severe circumstances. I decided to join the movement for independence of Kosovo, soon becoming one of its leaders. My motivation was to help my people, whose struggle for freedom was met with the guns and tanks of Serbia’s occupying forces. Being assigned to diplomacy as the Minister of Foreign Affairs of Kosovo, I had to negotiate and push for changing the mindsets of world diplomacy on the Kosovo question and the unresolved Albanian question, the necessity of former Yugoslavian disintegration and the need for the Balkans countries to step into democracy. Looking from the perspective of today’s achievements for my country and the Balkan region in general, I believe it was worth struggling to see our dream come true, even risking our lives.

Ten years of wars of independence in the Balkans have caused untold tragedies for so many people, though they could not stop us from fighting for our dream, which eventually came true. Today’s political map of the Balkans with new states born, including Kosovo, was highly costly but highly valuable as it ensures that genocide will never again happen against our people. In two decades of peacebuilding and democratic state building, progress was mixed. A lot remains to be done to build a better future. This entails fostering sustainable peace, good governance free of corruption, economic growth and employment, rule of law, justice and transitional justice, combating inequalities – especially gender equality – preventing autocracy, coping with old and new security challenges, closing open bilateral issues and speeding up European and Euro-Atlantic integration.

Throughout this long journey from war to peace, I have played the role of negotiator. Being a negotiator in war and peace times, there are differences when it comes to the emotions, even while my goals, principles and strategies have remained the same. I was goal oriented and I believe each negotiator should have a clear goal in peace negotiations. The goal is why you enter the negotiations with your enemy, and that goal is “a just peace” and not “peace” only. A just peace removes the causes for wars and tragedies to happen again. A just peace entails a just solution in resolving conflicts. While compromises are necessary in reaching a peace agreement, the principles around the goal should not be compromised. Being a negotiator requires leadership and decision-making capacities to make the right decision at the right moment, within the existing framework of national and international dynamics. Negotiating peace in times of wars is the most difficult task, as it requires restraining your emotions while you talk to your enemy who is killing your people. However, controlling emotions is necessary for negotiating and making rational decisions. Negotiation in peace times puts you in a better zone emotionally, though your mind cannot resist circulating the terrible pictures of tragedy of war and oppression your people have experienced. To gain confidence in yourself to walk the new chapter towards peace and neighbourly relations, it is important to have your fellow people next to you.