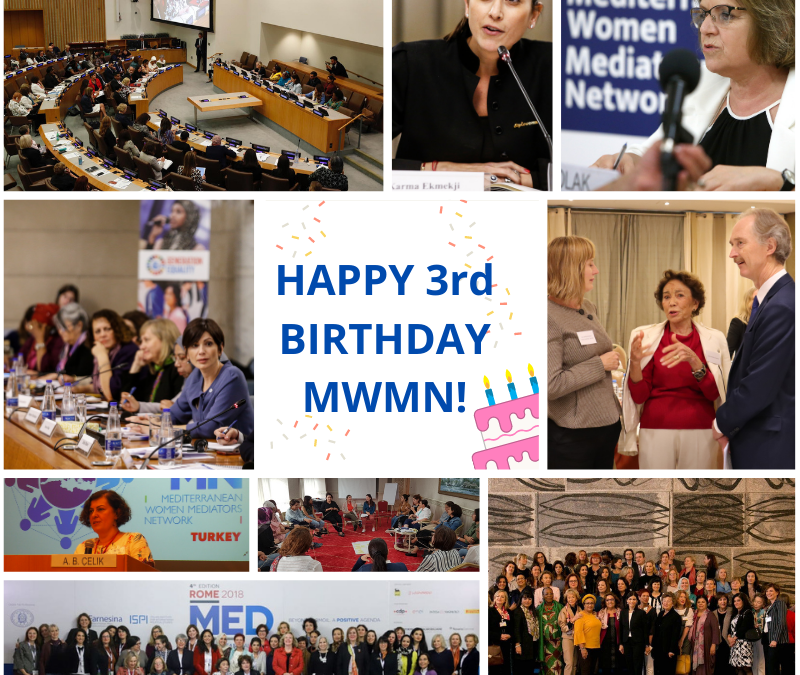 Three years ago, on October 25 2017, the Mediterranean Women Mediators Network was officially launched. After a process of research and selection of members that lasted almost a year, a two-day event held at the Ministry of Foreign Affairs and International Cooperation in Rome inaugurated this project. The event saw the participation of the Italian Minister of Foreign Affairs and International Cooperation, the founding members of the newly established Network, representatives from international and regional organizations, as well as representatives of other regional networks of women mediators and international experts in the field of mediation and peacebuilding.

Three years have passed and the Network can look backwards at all its achievements. Throughout the years it has worked to develop and deepen relations with other existing realities which has led to the establishment of the Global Alliance of Regional Women Mediator Networks – for which it is currently acting as Coordinator of the Secretariat. It has also developed synergies which have enabled its members to attend international conference, workshops and seminars.

Several trainings have been conducted on Gendered and Inclusive Mediation, on Leadership in Mediation and on the Art of Communicating and Public Speaking to deepen the knowledge of the members and as part of the capacity development goal to increase access and engagement. Following on this trend, the Network has launched a series of webinars to provide in-depth focused discussion on specific issues aimed also at raising awareness. Furthermore, in light of its success, the Network has decided to expand and issue calls for new members. The MWMN can sees the engagement of more than 50 members from 26 different countries.

Focusing on the local, the Secretariat has worked with the members to develop activities and initiatives on the ground. This fruitful interaction has led to the establishment of two antennas in 2019, namely in Cyprus and Turkey, and will soon see the establishment of other two antennas in Kosovo and Lebanon.
Finally, these years have seen the Network landing on all social media platforms, Twitter, Facebook and Instagram as well as the creation of a monthly newsletter.

Building on the many activities done and taking stock of best practices and lessons learned, the Network is looking ahead with more activities and initiatives to come. Sign up to the newsletter and follow the MWMN on social media to find out more on what is yet to come.