Launch of the Kosovo Antenna of the MWMN 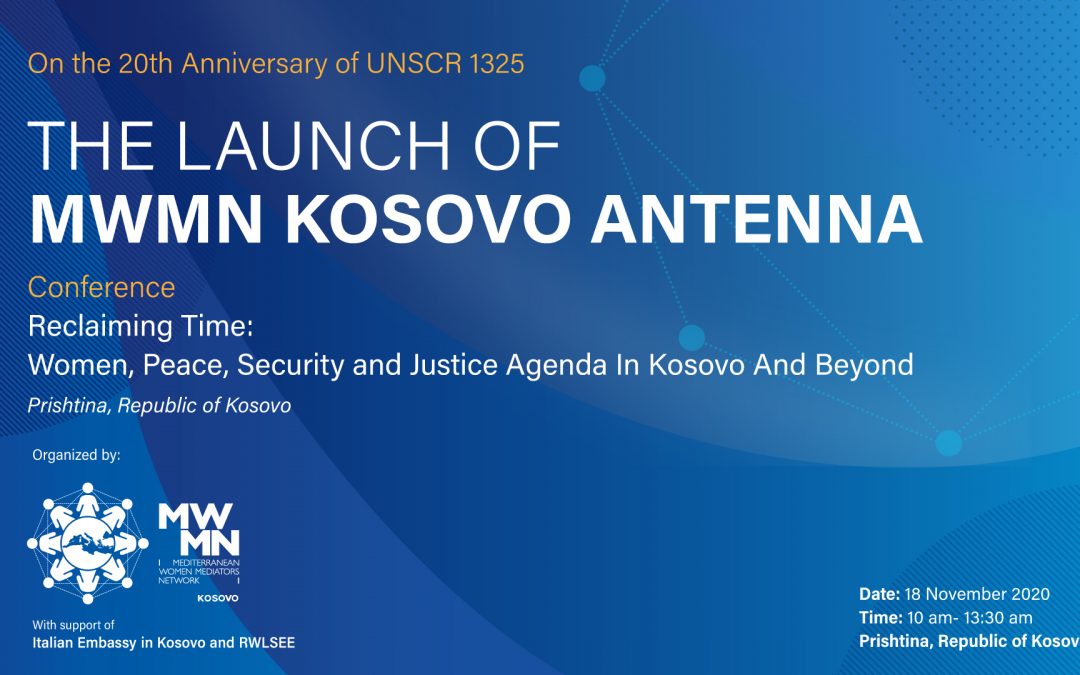 On Wednesday 18 November 2020, the Mediterranean Women Mediators Network (MWMN) in collaboration with the MWMN Kosovo Antenna and the Regional Women’s Lobby in South East Europe (RWLSEE), and with the support of the Embassy of Italy in Kosovo, organized a virtual meeting to launch the MWMN Kosovo Antenna titled “Reclaiming Time: Women, Peace, Security and Justice Agenda in Kosovo and Beyond”. The event saw the presence and participation of the Vice-Minister of Foreign Affairs and International Cooperation of Italy Marina Sereni, the Italian Ambassador to Kosovo Nicola Orlando, the Acting President of Kosovo Mrs. Vjosa Osmani-Sadriu, Former President of Kosovo Atifete Jahjaga, the Head of the MWMN Secretariat Irene Fellin and members of the MWMN Kosovo Antenna Edita Tahiri, Jeta Krasniqi and Linda Gusia. Representatives from the Kosovo Government and Parliament, United Nations, academia, and Kosovar civil society organizations participated also in the panels.

The event, bringing together women from diverse backgrounds, was an opportunity to share views and experiences on the implementation of UN Security Council Resolution 1325 during the past 20 years as well as drawing an analysis of the achievements and challenges for Kosovo while identifying opportunities and steps forward. Discussions were also centered on the importance of strengthening the localization of the National Action Plan and youth engagement in Kosovo. Further focus was placed on women’s participation within the framework of the ongoing international dialogue on the normalization of relations between Kosovo and Serbia.

The conference was aimed at discussing and developing recommendation for Kosovo and the international community on how to improve gender equality as a whole and specifically in peace processes, and how to put women at the centre of peacebuilding efforts in Kosovo and the region.

Dr. Edita Tahiri, Former Deputy Prime Minister, Chair of RWLSEE, and Member of MWMN Kosovo Antenna opened the conference, tracing the history of Kosovo women’s engagement in the building of the country as we know it today: “Women in Kosovo have been a vital part of the Liberation movement, so we perceived liberation as a freedom for all. Through new strategies and ideas, bringing new forces in terms of human capital to the floor, we can change perspective and build a gendered peace.”

During the first panel, Marina Sereni, Italian Vice Minister of Foreign Affairs and International Cooperation reaffirmed the Italian commitment to a durable and sustainable peace both in the Western Balkans and in the broader Mediterranean region while emphasizing the key role the MWMN plays for this purpose. The VM highlighted that “there is an urgent need to foster women’s participation in peace processes, because we are confident that women can provide the key to establishing a more peaceful society in the region.”

Irene Fellin, Head of the MWMN Secretariat welcomed the participants to the event underlining the value of the Network and women’s civil society actions in the promotion of the Women, Peace and Security (WPS) Agenda: “the way towards peace and stabilization is a journey, and women part of the MWMN are walking together hand in hands across the divides, the political and ethnical diversities, for building a sustainable peace for all.” Moreover, she stressed the importance of a solid political will shared between institutions and civil society: “if we want to ensure a political will and therefore the implementation of the WPS Agenda, we have to work in synergy.”

Mrs. Vjosa Osmani-Sadriu, Acting President of Kosovo and Keynote speaker concluded the opening remarks. Noting how in Kosovo “the historically significant contribution of women faded away resulting in their marginalization,” she welcomed the establishment of the MWMN Kosovo Antenna as a key step to promote and enhance the WPS Agenda. Furthermore, Mrs. Osmani-Sadriu underscored the need for women’s reciprocal support, since “everyday is a challenge for us. But as long as we are together encouraging each other, the future will be brighter, and the next generation of women will not face the same challenges that we faced.”

Jeta Krasniqi, KDI Program Manager and Member of MWMN/Kosovo Antenna moderated the first Panel 1 on: Advancing the WPS Agenda 20 Years After the Adoption of UNSCR 1325. The adoption of Resolution 1325 in Kosovo builds solid bases for an establishment of powerful women who raised their voices and fought for the citizens and for human rights, alongside for their rights as women. However, Ms. Kranisqi pointed out how despite the key role women have played, after the conflict, their role has been marginalized and neglected. Therefore, despite positive accomplishments, numerous challenges remain to be addressed.

During the first panel, Atifete Jahjaga, Former President of Kosovo, Teuta Sahatqija, Deputy Minister of Foreign Affairs of Kosovo, Ulrika Richardson, UN Development Coordinator in Kosovo, Edi Gusia, Chief Executive of the Agency on Gender Equality in Kosovo, and Ariana Qosaj- Mustafa, Head of Kosovo Women Network Board, shared their views and experiences providing both insights on best practices and highlighting important challenges to be addressed. Discussions also included topics such as war trauma and violence against women, while also addressing the impact the COVID-19 pandemic has had in addressing these issues.

Dr. Linda Gusia, Professor at University of Prishtina and member of Kosovo Antenna of MWMN, moderated the second Panel on: Women’s perspectives on peace processes and gender inclusive peace agreements. Panelists Mimoza Kusari- Lila, Member of Parliament in Kosovo, Blerta Deliu-Kodra, Member of Parliament in Kosovo, andVjosa Dobruna, former Ambassador of Kosovo in Netherlands and women’s rights activist shared their insights on virtous examples of women’s inclusion in Kosovo and their demonstrated added value. Examples were drawn both from the realm of decision-making and politics and from advocacy and activism demonstrating achievements reached through numerous initiatives. Nevertheless, it was pointed out how women’s participation in various sectors remains low. Drawing on these examples, Nita Luci, Anthropologist and Professor at University of Prishtina and Donika Emini, Executive Director CIVIKOS discussed the diversity of women’s movements in the country and the role platforms can have in focusing on common goals and highlighted how the patriarchal stereotypes still hinder the full implementation of the UN Security Council Resolution 1325.

In closing remarks, Nicola Orlando, Ambassador of Italy in Kosovo expressed full solidarity to the work of the MWMN and the Kosovo Antenna, which enjoys Italy’s strongest support: “by now, we know that peace and reconciliation processes like the one pursued in this region can only succeed if they include women. There is no time to lose.”