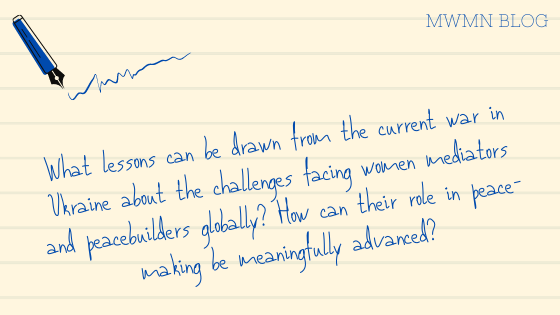 Even 22 years after the UNSCR 1325, which recognised and set out to increase women’s agency in peace processes, the number of women at peace tables as negotiators, mediators or witnesses is less than what is expected. The pictures from the Ukrainian-Russian negotiation teams still reflect the traditional understanding of men as peace-making leaders and high-level diplomats. Moreover, this picture is similar in most parts of the world, even in the countries emphasising gender equality.

Contrary to what this picture tries to present, many studies show that women’s presence at peace tables can bring new approaches and methods to and demands for peace, widen negotiations beyond issues of military action, power and wealth sharing by incorporating social and humanitarian matters and promoting a non-competitive negotiating style and bridge-building between the parties since they mostly aim to establish positive relations. Women’s leadership and participation at peace tables also ensure the inclusion of community needs, improved humanitarian assistance, the conclusion of peace talks and greater chances for economic recovery after conflict.

Despite these findings, why aren’t there more women in peace-making and peace-building roles? Besides the obvious answer of “patriarchy”, we also need to focus on the less visible jobs women do that need to be incorporated into formal peace processes, which often prioritise formal Track 1 processes. Women at higher levels need to be connected to the grassroots because working for or being in touch with civil society socialises one into the norms of listening, understanding and reciprocating. International organisations and networks need to emphasise that in the selection of women peacemakers such civil society background or linkage is crucial.

In an effort to challenge the wrong assumption that there are not enough skilled women peacemakers willing to serve at the peace tables, the Global Alliance of Women Mediators Networks presented to the UN a list of women to be deployed in peace processes. Women Mediators Networks teach their members the ethics of care, which brings a vision of mediation that is less about power relations and hierarchy and more about the relational aspects of conflict and the ability to listen and negotiate with understanding with those with whom one does not agree. It is this emphasis on relational aspects in mediation that makes women mediators a special asset. While they are often wrongly separated from the political arena where “hierarchy” and “power” are prevalent, women make “everyday politics” a reality because they can build environments filled with trust and can find entry points into “difficult-to-talk-about issues”.

The recent progress for women’s role in peace and security issues and the launch of the Global Alliance of Women Mediators Networks have been challenged twice by recent global events. Firstly, by the COVID-19 pandemic that spread across the world in early 2020, exacerbating the already dire situation in conflict zones and triggering new conflicts. Secondly, by the escalation of the conflict between Russia and Ukraine, culminating in Russia’s invasion of Ukraine in February 2022.

The result is a new world that has become more dangerous for women, human rights defenders, mediators and peacebuilders. Accordingly, if steps are not taken to mitigate these effects, the global effort to ensure women’s full and meaningful participation in peace processes will be at greater risk.

Since Ukraine’s independence more than 30 years ago, Ukrainian women have held less than ten per cent of the seats in office. Discrimination against women in political life has continued and women’s lack of access to power has been prevalent. Yet, as the war rages on, women and children have made up the bulk of the more than four million refugees (95 per cent) seeking asylum in Poland, Bulgaria, Romania and the other European countries.

As such, the role of women negotiators, mediators and peacebuilders is crucial to address short-, medium- and long-term impacts of the conflict. Ukrainian women should be encouraged to take part in major peace initiatives, taking into consideration that they bring a diverse range of critical skills needed to respond to the causes of this violent conflict. They should be empowered to take an active role in the solution to their problems.

In the short term, Ukrainian women peacebuilders together with appointed UN mediators need to work closely together to leverage the massive response to the conflict and help effectively manage the great influx of Ukrainian refugees. This is especially important to protect women from sexual exploitation and minors from the evils of child trafficking. In this context, Ukrainian women need funds for housing and training to protect themselves against violence and to seek police, legal and medical assistance in case of assault.

Since the war is still ongoing, any future planning by mediators and peacebuilders will have to take into account the duration of the conflict and the long-term impact of the refugees on EU host countries, including integration, asylum seeking, the provision of educational and health services, and overcoming language barriers. EU member states, for their part, have reacted with unprecedented speed and generosity, through the mass mobilisation of private and public initiatives.

By capitalising on the network of Ukrainian women leaders, the EU, the UN and its aid agencies can ensure that these efforts have the biggest impact.

When 2 March 2022 the United Nations General Assembly put forth the resolution condemning Russia’s invasion of Ukraine only one African state voted aligned with Russia: Eritrea. A significant group of African states abstained (17), some avoided taking any stance and left at the time of voting (8) and the remainder condemned Russia for its breach of international law (28).

Did African states miscalculate when deciding not to condemn Russia’s lack of self-restraint as a great power? Did this cautious move by African states work to the best of their interests in terms of definition of a concerted approach to the outside world?

At the normative level, the fact that African states did not condemn Russia’s violation of the ius ad bellum through its illegitimate use of force, its interference in Ukraine’s internal affairs and challenge to a sovereign state’s territorial integrity is problematic. The violation of these foundational principles of the global international order is challenging the same principles that have sustained the regional international order. Indeed, classic wars in Africa over territory have been the exception. Russia’s aim of destroying Ukraine if met without resistance would confirm the expectation that only great powers can aspire to have their sovereignty respected. In this global international society, might would become right and the first states to lose would be the less powerful ones.

At the economic level, African states that did not condemn Russia are including in their calculations just part of the picture. Economic relations between African capitals and Moscow might be strong but the rise in inflation, food insecurity and the higher prices for consumers’ basic needs are likely to stir prtests and contribute to the increase of people facing malnourishment and poor diets, and falling below the poverty line. Adding the implications of the Russia-Ukraine war to the pre-existing severe impact of COVID-19 led the African Development Bank to confirm the creation of an Emergency Food Production Facility in order to alleviate the impact of the global food crisis sparked by the Russia-Ukraine war across the continent. At the financial level, those African companies relying heavily on Russia’s bank loans will be affected by the robust economic sanctions imposed by the West.

At the political level, the dividing line between illiberal and liberal democracies explains in part the positioning of those that abstained from condemning Moscow and those that aligned clearly with the West. At the military level, African states and leaderships might continue to benefit from their ties either to Moscow or alternatively to Ankara as an alternative to the West. Meanwhile, those that condemned Russia’s invasion will be aligned with the West and this is likely to become the dividing line in Africa’s relations with external powers. Common interests will prevail over the collective interests and the regional international society will fade in importance when compared to bilateral agreements between African actors and external actors.

In his capacity as Chairperson of the African Union, Senegal President Macky Sall put forward a plan of de-escalation between Moscow and Kyiv through dialogue. This move embodies one of the dividing lines in the approach towards Moscow between the Global North and the Global South. Time will allow us to draw lessons from the merits of the Global South stance of privileging dialogue over sanctions in their handling of the Ukraine-Russia war.