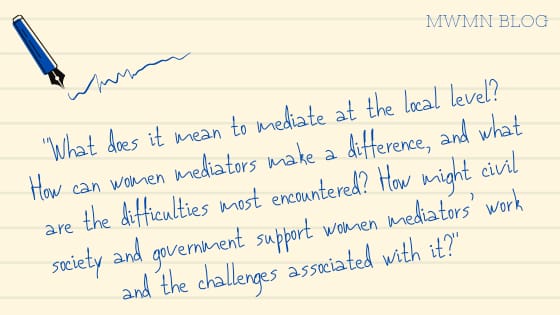 Let’s give peace a real chance

Local mediation has increased in importance because today with fragmentation and “glocalisation” of conflicts, the whole planet is a constantly changing trouble spot and the road towards peace has needed to adapt. It is very apparent that Track 1 negotiations, in isolation, cannot put together a substantive and inclusive peace deal; and that the work local, especially women, mediators are doing is increasingly important and often crucial for the road towards peace to not grind to a halt.

So what is local mediation? Local mediation does not have a prescribed structure or tone, it can be ad hoc or systematic, it can be one-off or a series of activities, and those mediating can be local actors, international actors, a combination of both or none of the above. It can be as diverse as creating safe story-telling spaces for women from the different communities within the frozen conflict in a divided Cyprus, or brokering a local ceasefire in Uganda.

Local or insider women mediators are effective because they often have detailed knowledge of the specific conflict; they have the ability to build or leverage relationships; and they are typically deemed as trustworthy and credible by the conflicting parties. An example of this is when informal groups of women during the Syrian conflict were able to save the lives of a group of detainees by convincing a wider group of women to approach the battalion leader, which resulted in the release of the detainees a month later as part of an exchange deal.

Local women mediators however encounter a number of specific challenges that we need to bear in mind:

So if we are serious about giving peace a chance, we need to strengthen the collaboration between the mediation networks and the sharing of resources AND we  especially need to take seriously the danger in which women mediators often find themselves and take real measures to protect them.

Twenty-two years have passed since the adoption of UNSCR 1325. Over these years, experience on the ground has repeatedly confirmed that the day women are more involved in mediation operations at the local level is the day a peaceful community is founded. Integrating women in the resolution of sensitive issues in their communities has helped to establish bonds of trust between the parties in conflict, which in some cases has led to the strengthening of collaboration with the various actors and local leaders to support the mediation carried out by women from their areas.

Certainly, the presence of women at the tables of mediation eases tensions and calms the atmosphere. Promoting the appeal to the expertise of women mediators also ensures the durability of peace agreements. Nevertheless, on the ground we face difficulties and challenges that hinder women’s inclusion in the peace process. We find logistical and financial obstacles, as well as legislative and institutional ones. But the biggest challenge is the rigidity of the system and the lack of expertise and capacity of organisations to support women’s role in the peace and security agenda, which has become more accentuated in the aftermath of the Covid-19 pandemic.

All these challenges that limit the involvement of women mediators in the peace process can be remedied if there is a political will to include them through legal and institutional structures that consolidate their representativeness within the mediators’ delegation. Civil society organisations must be recognised as a partner in supporting governments, through the implementation of capacity building programmes for women based on the strengths of their local culture.

Civil society is also best equipped for implementation of the National Action Plan of UNSCR 1325 by acting as an incubator for local networks of women mediators, which will automatically serve as a source for expert mediators who can play a key role as peace leaders.

As the end of the year is approaching, it is a good time to take stock and approach 2023 with renewed strengths and focus. I often find myself asking what makes local mediation so crucial in contexts of active conflict such as those I have lived in for the last 15 years. Not an easy question to answer, but essentially it all boils down to some key considerations.

Most of the mediation work done at the local level cannot be found in the public sphere, it is covered by confidentiality, it is sensitive in nature and discrete in its execution. In war-torn countries, these are the most important safeguards that enabled me and many other colleagues to navigate complex contexts and help communities find solutions with assertive interlocutors in power. Most importantly, these characteristics have been key to ensure the protection of all those involved, regardless of whether mediation was taking place in Sudan, Afghanistan, Pakistan or Syria. However, what makes in-country mediation successful is also what makes it less known. Its very nature is what often leaves its achievements overshadowed by more public peace processes and unable to influence the international political agenda. This creates a disconnect between all of those working to make peace an option.

This is even more true when zooming in on the role that women mediators play in these contexts. More often than not, extremely determined, prepared and effective women mediators are put in an even more sensitive spot by their context (due to factors like culture, discrimination, religion and so on). For example, often they are not seen as an “adequate” interlocutor to engage in dialogue with law enforcement personnel, leaving them at the outskirts of vital discussions on security while always being on the frontline of conflicts. Similarly, while being able to perform in their countries throughout the chain of command, they are understood by foreign interlocutors as having only a “localised” reach and scope. Lastly, when they can finally make it and be seen and heard in senior fora, this happens at very high personal costs and with limited capacity to influence sustained change in their contexts. Syria and Afghanistan are just two examples of far too many out there.

The successes and failures of the past should not leave us discouraged, nor make us think that nothing can be done. To the contrary, they inspire renewed efforts to make women’s inclusion in peace mediation both salient and effective. All women mediators I met had in common the decision to devote their lives to their country and their people. During my career, what I was asked the most by women mediators themselves was for them to “be given a real chance” – creating the conditions for them to act, speak up and bring the change they want to see.

There is not a magic recipe that can work in all contexts. However, what does fit all contexts is a genuine and renewed concrete commitment by governments and international and national organisations to realise that “real chance”. With the work done together with many other women in the MWMN and beyond, we came up with a pretty exhaustive tangible list of what that would look like. And it is from this place that the new year will start.