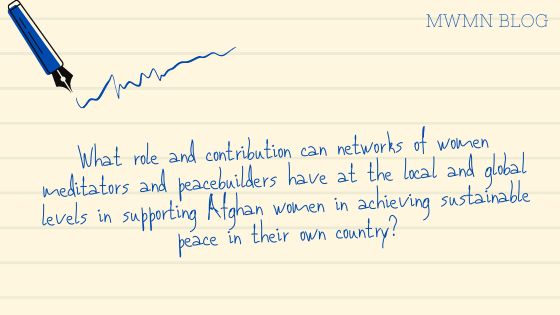 “I knew what life would look like (…) female season was over.”

Many like me witness the unfolding of the uncertainties that lie ahead under changing government in Afghanistan mostly in disbelief, feeling powerless, wanting to help without having the space nor the leverage to do so. Over the last 20 years, many Afghan women stood up and spoke up on behalf of themselves and the hundreds of thousands of fellow Afghans who, while striving to live a life in dignity every single day, remained mostly behind the scenes. Inspired by and learning from their strength and courage, which have always characterised the population of this country, there is a lot that networks of women meditators and peacebuilders can and should do.

First, they should listen to those who left the country and equally so to those who stayed behind, and commit to amplify their messages. Their voices need to be heard and women mediators know how important that first step is. Women’s networks need to lobby to ensure that western delegations going into Afghanistan will continue to include senior women staff able to communicate with women and girls, while at the same time advocating for women’s quotas in delegations sent to negotiate with the Talibans. Women taking part in these delegations should be given the space to take decisions and influence decision making, but also support and inform initiatives aiming to engage the male population in a sustained dialogue. This is key to preserve women’s space to access their rights, including those of education, work and legal rights.

Second, networks can play a key role to ensure that asylum in third countries for those fearing persecution is and will remain an available option, while advocating for the situation in Afghanistan to remain high on the political agenda, particularly when it comes to violations of human rights.

Finally, and in particular in support of the millions who stayed and will remain in the country, networks of women peacebuilders can and should advocate to ensure that aid into the country not only reaches women but is conditional on the respect of women’s and girls’ rights. Aid should be provided in consultation with civil society in the country and include support to micro-level projects, extremely vital especially at a time when the country is hit by the harsh consequences of drought, severe economic crisis and COVID-19.

Women’s inclusion in formal peace processes is dealt with as a political agenda by key actors and governments. International frameworks do not have clear mechanisms for making parties/stakeholders/governments accountable for the long-term implications of women’s politicisation in processes. Women have been effective mediators in conflicts at all levels and there is a long history of this. Mediation itself and women’s unique experiences, skills and approaches are becoming more and more relevant in addressing today’s complex conflicts. The “peace table” is important but not sufficient to address protracted and long-term conflicts. There are numerous solid examples of how sustainable peace processes require a serious emphasis and effort on several platforms, involving a number of players beyond those sitting at the “top table”. Unfortunately, there is a visible lack of understanding about this issue – and indeed about the roles that women play in addressing the root causes of a conflict, in contrast to just addressing the self-interest of the parties involved.

Women, in Afghanistan for instance, have historically been actively engaged in resolving community- and tribal-level conflicts, often informally. Even in formal roles they have been vital in bringing stakeholders within the system together and providing a bridge for confidence building. In the Afghan context internal consensus based on the history of a conflict has been key for the success or failure of a process. Women mediators and peacebuilders in Afghanistan have been confronted with several challenges. First and foremost, they have experienced the lack of active and sufficient engagement of women mediators at all levels, beyond a tokenistic participation of women who are often caught in the dilemma of negotiating the interests of the involved parties at the table and with little support and access to negotiate in the best interest of the people and the communities.

The Global Alliance of women mediators is a source of credible knowledge, expertise and experiences of women mediators who have dealt with complex conflicts in their communities, coming from wide-ranging contexts. These networks are an untapped precious resource that should be called upon to avoid further failures of peace processes and of states.