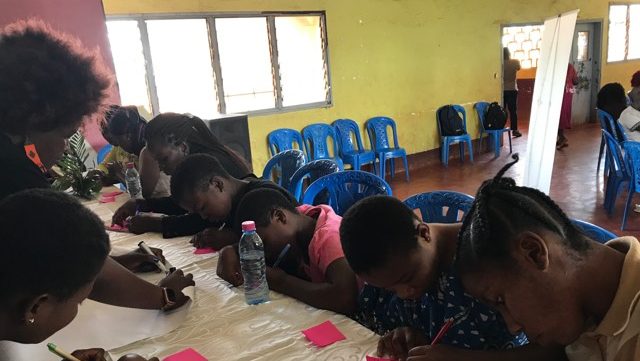 MWMN member Emine Çolak (Cyprus) attended, together with other 7 international experts, a meeting organized by The Women’s International League for Peace and Freedom (WILPF) in Cameroon. The meeting took place from September 26th to October 4th 2019 in several locations of the African country and was organized within the framework of the “Gender Conflict Analysis” project.

I accepted an invitation to participate, together with other 7 international experts, in a meeting organized by The Women’s International League for Peace and Freedoms (WILPF) in Cameroon.

The project was implemented in July 2019 and is conducted by the platform of “Cameroon Women for Peaceful Elections and peace Education” and their partners. The aim is to seek peaceful and lasting solutions by analysing the dynamics of the Cameroon conflicts from a gender perspective and gather input from the international actors on sustainable solutions to the various crises underway in the country. As part of this project, WILPF is conducting a participatory research to better understand the current fault lines driving conflict and causing general instability. In addition, WILPF and its partners will undertake fact finding activities in the affected and non-affected regions to identify community leaders, IDPs and other individuals of capacity to discuss the crisis the country is facing.

Once concluded, the project will produce a report to be used in line with the aims of UN Resolution 1325 to seek inclusion of women in peace processes and to add gender sensitivity to the content of decisions and policies for peace and stability.

Conflicts in Cameroon have been ongoing for 3 years. The crisis has started in 2016, after the French-speaking government repressed peaceful protests in the English-speaking regions. Demonstrators were marching against alleged discrimination by the French-speaking government which, in response, carried out mass arrests. During the protests, security forces also shot dead several demonstrators. In reaction to that, the protest movement became radicalized, taking up arms and carrying out deadly attacks to army and police posts. The army responded brutally against the inhabitants of the Southwest and Northwest regions.

The so-called Anglophone crisis left more than 3,000 dead and around 500,000 displaced. Post-presidential election (October 2018) clashes have seen the imprisonment of many opposition leaders such as Maurice Kamto, the leader of Cameroon’s main opposition party who might face the death penalty for leading protests against the result of the elections.

Cameroon’s conflict is becoming increasingly brutal. Multiple murders, torture, are being carried out and villages have been burnt down, causing displacement and mass exodus. Tens of thousands have fled to Nigeria or sought refuge in the French-speaking Cameroon. Attacks on schools and government buildings have left children without schooling for up to three years and citizens deprived of state identity documentation.

Before our arrival in Yaoundé, we learned that President Paul Biya had called for a National Dialogue and told the Nation that the dialogue was “to allow the examination within Cameroon’s constitution the ways and means by which the deep hopes of the people from the north and southwest, but also of all other parts of our nation, can be answered.”

While some critics described Biya’s initiative as an insincere “monologue” that would have been attended only by the leadership’s supporters, our host, WILPF Cameroon, saw it as an opportunity for women to be proactive and demand inclusion. Local women responded quickly by forming a consultation platform and by producing a memorandum signed by 53 organizations.  Their response was inspiring to observe and we – as WILPF’s delegation – arrived in time to make minor contributions to this impressive text, possibly the only one of its kind submitted to the National Dialogue. [1]

During our visit to Cameroon, we travelled to Yaoundé, Baffousam, Dschang and Doula. In each location, we were hosted by local women organizations. We met displaced persons living in dire conditions, traumatised victims of killing, torture, intimidation and kidnapping for ransom of their loved ones. We met children saddened to be deprived of education, and teachers threatened and punished for trying to do their job. We heard how many had fled into “the bush”, meaning hiding in the jungle for survival. In “the bush” they are deprived of basic needs, prone to all forms of danger and sickness: they live, as they say, “like animals, like monkeys”. However, seeking survival in cities can be more dangerous: in the absence of official documentation, people are easily discriminated or exploited. Many women in desperation can end up in prostitution to survive. Those not displaced, are trapped between intimidation and violence, not knowing what to do for their safety in an environment of lawlessness and fear.

At the end of our mission we felt fortunate to have collaborated with committed and capable individuals who had well looked after our practical needs, enabling us to contribute directly through frequent de-briefing and brainstorming sessions along the way. Before leaving, we submitted to our Cameroonian hosts a report of our impressions and recommendations hoping it will be useful for their task of producing the overall report.

As in all violent conflicts, there will be no fast and easy solution to the problems in Cameroon. But the solidarity and synergy of Cameroonian women who could evidently work in good coordination and with speed and efficiency is a great blessing to their country and also a valuable example that we in the network of women mediators can learn from.