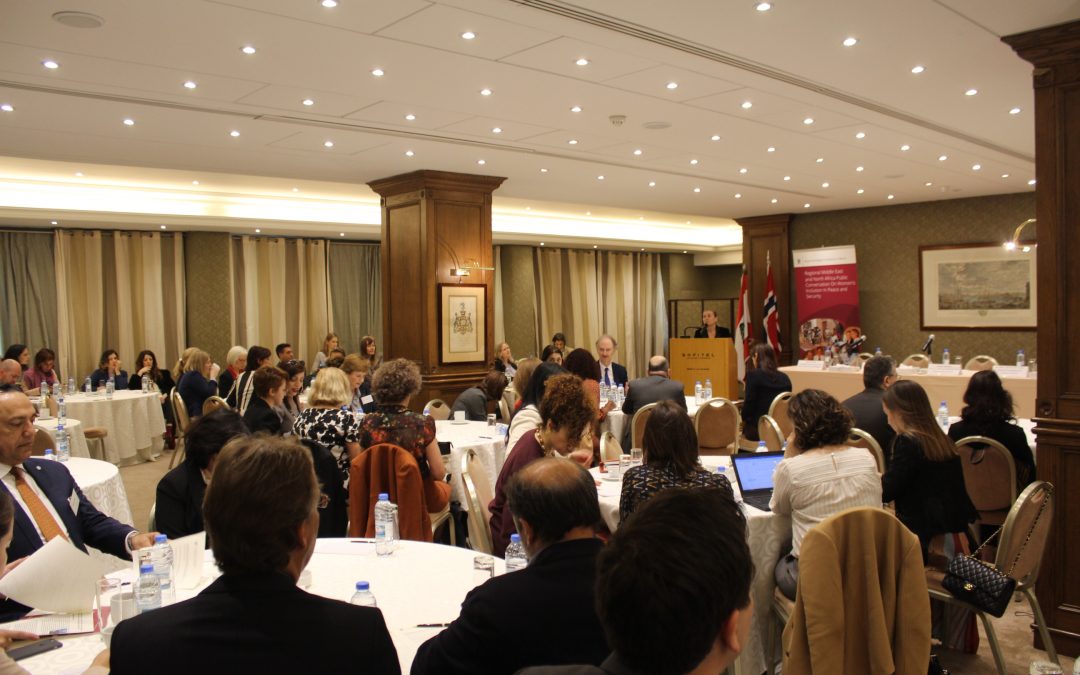 On March 21-22, in Beirut, members of the Mediterranean Women Mediators Network (MWMN) met with a delegation of the Nordic Women Mediators – Norway to share experiences and to strengthen cooperation with international actors and regional stakeholders to achieve greater inclusion of women in peace and reconciliation efforts.

Closed doors workshop
The Middle East and North Africa (MENA) region is one of the key areas for the MWMN in terms of enhancing women’s participation in peace and reconciliation processes, and a priority region for the Norwegian branch of the Nordic Women Mediators. The two networks work under very different conditions, but they share the same goal: increased inclusivity. The meeting gave the participants an opportunity to hold a focused discussion on the role of women mediators and on how the networks can contribute to strengthening women’s involvement. Comparing and contrasting the networks’ strengths and challenges allowed to highlight the complementarity of their work and to define potential areas of cooperation between the Mediterranean and Nordic networks, including in cooperation and support of the United Nations.

High level event
The gathering included participation to a high level meeting on women’s contribution in peace and security in the MENA region, organised by the Norwegian Embassy in Lebanon. Ms. Hafida Benchehida spoke at the event on behalf of the Mediterranean Women Mediators Network (MWMN), together with Idun Tvedt, Norwegian mediator and Special Envoy to the Philippines, and Mirin Maalouf Abi Chaker (National Commission for Lebanese Women). The panel was moderated by Sanam Anderlini (International Civil Society Action Network – ICAN), and it benefitted from the presence and contribution of the UN Special Envoy to Syria, Geir O. Pedersen. The debate focussed on the barriers and ways forward for women’s meaningful participation in peace processes. The MWMN delegation included Ms. Hafida Benchehida (Algeria), Justine Abi Saad, Johanna Hawari Bourgély, Karma Ekmekji, Lea Baroudi (Lebanon), and Irene Fellin (MWMN Secretariat).